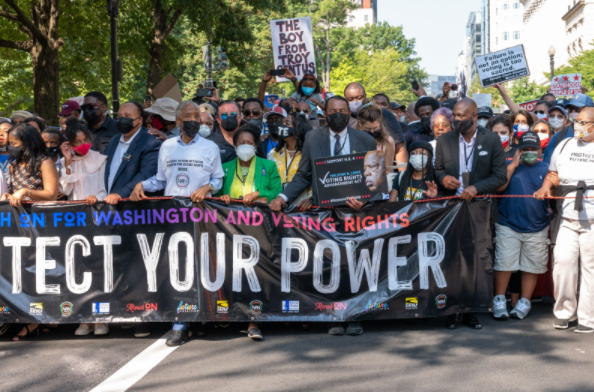 Friday, Aug. 27
On Friday, Aug. 27, Push Democracy Forward held a press conference with Texas lawmakers who have chosen to hold the line by remaining in Washington to push for federal protection against suppressive voting legislature. The presser was held at 3 p.m. EDT in front of the U.S. Supreme Court Building. The event took place on the heels of the U.S. House passing the John Lewis Voting Rights Act, and shortly after the Texas House passed contradictory legislature in Senate Bill 1 (SB 1).

Three days ago, Congress passed the John Lewis Voting Advancement Act (HR 4). Today, I was honored to stand with these courageous State Reps in Washington, DC. who are “Holding The Line.” I call them “American Patriots” because they are fighting to preserve Democracy for all Americans, by protecting voter rights. Now we’re pushing the Senate to pass HR 4 and HR 1. “Denying justice to anyone is an injustice to everyone, “said Bishop James Dixon, II, D .Min.

Texas Democrats have made it our plan to come to Texas where we know the answer is. We’ve done our part. We’ve held the line, but time is out! On the day before the 58th anniversary of Martin Luther King Jr.’s March on Washington, Texas passed racist voting legislature that will make it hard for people of color to vote. It will also make it hard for elderly Americans and those with disabilities to vote. Time is up and President Biden much urge the U.S. Senate to pass the John Lewis Voting Advancement Act now!” said Rep. Nicole Collier (D-Texas).

The John Lewis Voting Rights Advancement Act responds to current conditions in voting today by restoring the full protections of the original, bipartisan Voting Rights Act of 1965, which was last reauthorized by Congress in 2006, but gutted by the Supreme Court in 2013.

March On For Voting Rights Demonstration and Rally

The original March on Washington preceded the Selma Voting Rights Movement and is credited for helping the Civil Rights Act of 1964 passed.

Click to listen to the inspiring words shared by Bishop Dixon during the March On For Voting Rights Rally.